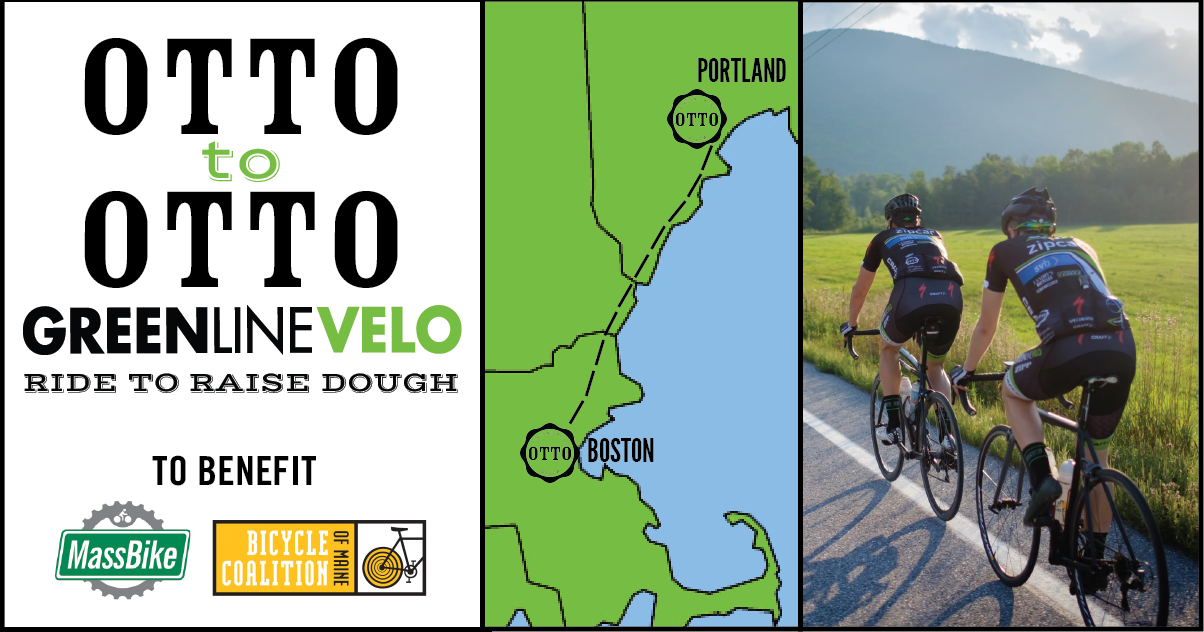 In one day.  That’s over 130 miles.  They’re gonna need your help, and a lot of pizza, to power through.

Green Line Velo and OTTO have been working together for a few years now (OTTO has been the final stop on GLV’s Wednesday Night Group Rides for years). The relationship grew out of proximity, shared values, and, well, pizza, bikes, and beer.

When OTTO became an official sponsor of the team in 2016, the idea of a Boston to Portland ride was sparked.  With a shared vision of improving our communities, the decision was made to raise funds and awareness for MassBike and Bicycle Coalition of Maine, with funds going towards cycling safety, infrastructure initiatives, and the promotion of cycling for fitness, fun, and transportation.

Final Wednesday Night Group Ride & Fundraiser
To kick off the event, we will be holding a fundraiser at our 888 Commonwealth Avenue location in Boston after the final Wednesday Night Group Ride on Wednesday, September 14. A portion of every sale between between 6pm-10pm will be donated to MassBike and Bicycle Coalition of Maine.  Please feel free to come out and celebrate another great season, and wish the team best of luck in their 130-mile journey.

Show Some Love — DONATE!
Anyone willing to make a donation to support cycling initiatives in Maine and Massachusetts can do so at the ride’s fundraising page.

Arrival Party, Giveaways, Food and Drink Specials
On Saturday, September 24, we will be holding an arrival party at our 225 Congress Street location on Munjoy Hill in Portland from 4-7pm.  There will be some great food and drink specials, giveaways, and other goodness.

As an added bonus for our cycling enthusiasts, our usual 10% offer to all Bicycle Benefits members will be extended to Buy One – Get One on all slices during the party. You can learn more about how the program works here. If you haven’t already signed up, the time is now!

Come out, meet the team, and support the cycling community!

Green Line Velo is a bicycle racing team based in Boston dedicated to competing at a high level and developing both individual riders and the sport in general.  By focusing first on a high level of camaraderie, they strive to create a team experience that is similar to collegiate cycling and which creates a cohesive group both on the road in races, as well as on training rides.

GLV are dedicated to the love of the bike, the spirit of competition and, more importantly, to the pursuit of fun and enjoyment for all.  They believe that the bicycle provides the means for their members to enact social good. Through a combination of competition and community outreach, they seek to promote that social good both on and off the bike.