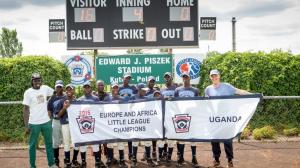 If you tune into ESPN at 1pm on Thursday, August 20, you will see Newburyport’s own Evan Petty, managing the Uganda Little League team in their opening game of the Little League World Series.

Evan, a Syracuse grad with a degree in Journalism and a love for baseball, worked in OTTO’s Newburyport location in its first few months of operations, before heading to Uganda to teach English. In his spare time, Evan assembled a juggernaut of a baseball team.

Read more about Evan in this Boston.com profile. It’s an inspiring story on many levels, and we hope you’ll join us in cheering on Team Uganda.

Today, two OTTO drivers from our Newburyport location (Aidan and Ryan) headed to Williamsport PA with 15 large pizzas to feed the team. We hope that we can help to fuel a win, although our gesture pales in comparison to what Evan has contributed.

We at OTTO are incredibly proud of Evan, and we wish Team Uganda the very best of luck during the series.